Tamworth Basketball Association has been in existence for 52 years and an incorporated body since 1988. We are required to maintain a constitution that governs our standards of operations, aligned to the relevant government regulations.

Among the changes, the most significant is in regard the structure of the board itself. At present the current constitution calls for an 8-person board covering the varying parts of the association. As Tamworth Basketball has grown, the 8-person board has resulted in each position becoming quite cumbersome and encompassing quite an array of activities. Additionally, board members are only able to sit for 1 year at a time on the board and can lead to issues when many board members leave at the same time, which occurred at the last Annual General Meeting.

Whilst on the surface, moving from an 8-person board where the board members have large and cumbersome roles, to a 5-person board seems illogical. However the new board structure more closely resembles that of most modern business enterprises. The role of the board is to set direction and to make decisions based on proposals from committees and subcommittees that are in control of a specific area of concern. The new structure forces us to create committees to oversee various areas of operations, involving more people in the running of the organization and each person having smaller roles to fill. 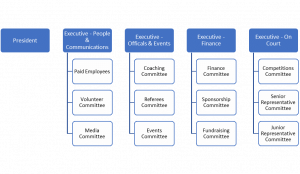 As president of Tamworth Basketball, I believe altering our board structure and incorporating more people into the running of our Association will be how we are able to best move our sport forward and grow into the future.

If you have questions please contact me via email president@tamworthbasketball.com.au.

I look forward to you seeing you at the Special General Meeting to discuss the proposed change to our constitution.